If I Had Half-Decent Parents I'd be a Wealthy, Respectable Professional 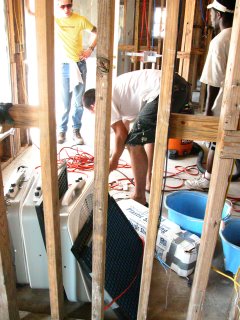 All respectable blog entries have a good quote. Here goes: “Life is Full of Mold.” --Wisdom of the Ancients. 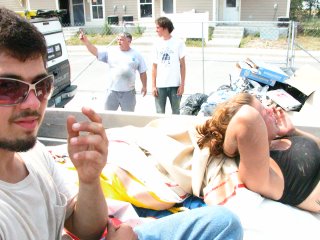 After all, it might be bad for your health. Today, a few volunteers went to some once-moldy Hope Six low income federal housing project homes. Hopefully, there is no mold left in these homes. Thanks to a mad scientist who spent thirty years trying to invent a solution that will ravage micro-organisms and mold, these home underwent a state-of-the-art mold remediation process-- something that's always necessary after a major "moisture inducing event." Sexy, right? Anyway, after the technician likened the alleged miracle-liquid to cake, some volunteers decided that it might be pretty groovy to bath in it-- that is, in front of the turntable fog machine doing its thing while on top of a ladder. They even tasted the liquid. Yes, this is in spite of the fact that this liquid supposedly kills mold on cont 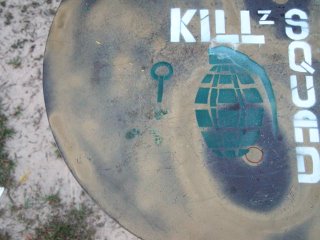 act more effectively than bleach and is set to retail at $50 a gallon. But no worries. China, India, and Malaysia have committed to purchase 500,000 gallons of the liquid-gold (or liquid-cake) sanitizing solution, so you know it's legit. Who is this mad scientist? Let's assume he's that guy whose name is on that 18-in-1 hemp soap. 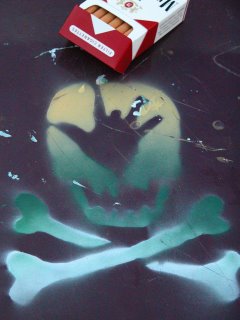 My grandma lived in New Orleans before the storm. Her house is near the lake front, just south of the University of New Orleans' Arena Complex. The house that she lived in for almost 60 years had about 5 feet of water in it. It's raised roughly 4 feet off the ground. When I heard about the storm, way back when, I knew I'd be coming down here to help.

I wound up in Biloxi rather than New Orleans because I knew Dave Campbell, founder of Hands On USA, would run a tight ship getting stuff done. I've been here since mid-January. In early February, I helped gut my grandma's house.

All this is going somewhere, I promise. As a matter of fact, I drove around New Orleans this Saturday. I had just finished dropping my sister off at the airport. I figured I'd get some good food at Whole Foods, go sit on the shore of Lake Ponchatrain and enjoy the hot, balmy afternoon. Unfortunately, the thought of lounging about dissipated as I drove through block after block of flooded, empty, dead houses.

Nine months after the storm, the houses still sit with little apparent activity. Miles of city are dead. None of this is new, I saw it all in February. What made me angry this time was the obvious lack of progress in New Orleans as compared to Biloxi. We read it in the paper, we even read it on blog posts like this, but we never really know it until we're in it.

I don't have much that's insightful, other than I recognized the anger boiling up at the little that the city of New Orleans has managed to accomplish in these neighborhoods during nine months since Hurricanes Katrina and Rita broke the levies and submerged most of the city for a month.

Seeing New Orleans so far behind makes me happy that I work in Biloxi where at least the possibility of change, redevelopment, and growth give volunteers, businesses, and residents, some hope.

Caught a Fish This Big 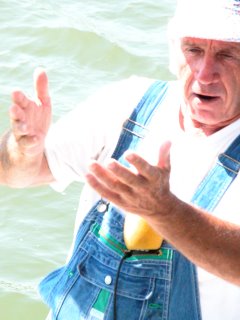 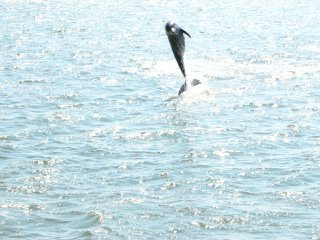 It's a hot day in Mississippi.
Tennessee Williams kinda hot.
The hot that soaks your skin.

That bird over there keeps singing, though.
Yet now the air wraps around its song-
and it seems to make the notes a little deeper.
Posted by Hands On Gulf Coast at 12:46 PM No comments: 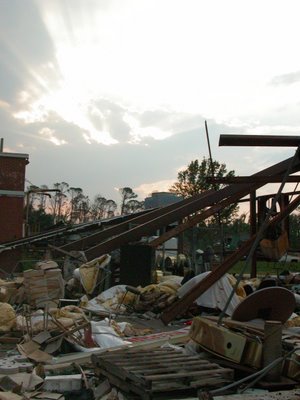 Hands on moves ahead

The Moss Point health clinic project is chaotically beautiful. Just the other night I stayed out painting until 3:30am with Andrew "Nebraska" Tipton. Practically living in Moss Point, most of us have developed an insane enthusiasm for the "awful, awful." Nate and Paul and the rest of us start everyday fresh, oblivious to the trailers full of impending frustrations. Perhaps this is because the project is so tangible and fulfilling. Locals frequently stop by and ask when it will be opened. Hopefully we will have it ready by Wednesday. We wouldn’t be close to finishing, if it were not for our new Americorp from West Seneca. They are breathing new life into Hands On at a crucial time. Their excitement and commitment to disaster relief is giving the remaining longtermers the motivation they need to keep moving ahead.

-Joel
Posted by Hands On Gulf Coast at 10:28 AM No comments:

So today was a good one. Hurricane Camp continues to fascinate and amaze me.
Things have been going pretty well. Of course there are the growing pain of an organization and the stuff that you always face when trying to herd cats, but then those bizarre Hurricane Camp moments occur. Maybe it's the guy that stands up and says that this time last year he was getting a kidney transplant and right now (even with all that trauma of dealing with that) he cannot think of any other place he would want to be to celebrate the rebuilding of his body. How do you quantify that? How do you chart the smiles and waves of the residents you get when you drive down the street with the Hands On Gulf Coast magnet on the car?
Well, as i have been told again and again you don't. What you do is bring it into your mind and saver all that. Use it to charge you when you get up in the morning and drawn from it when you just can't get the recourses right now that you want to help the rebuilding.
So we keep going and doing it all because in an odd slant of the word it makes sense.
Posted by Hands On Gulf Coast at 12:40 PM No comments:

Well, Tuesday night (16 May) was a sad night for Hands On Gulf Coast because we said good bye to Americorps NCCC (National Civilian Community Corps) team Red 1, aka Emergency Dance Party, the from Charleston, SC. They left Wednesday morning for their transition to a project in the mountains of Tennessee.

When they showed up during Storm Corps week (around the 13th of March), they were quickly trained to lead interior gutting and demolding jobs. They became invaluable, indespensible members of the work force. Equally quickly, their presence became part of the tapestry of personalities that make Hurricane Camp a place that people want to return to.

During their time here, they helped gut and demold houses, hang sheet rock, put on rooves, organize community meetings, work with residents in need of assistance, cook food at the Salvation Army, and help out in countless other ways.

To say good bye, we had a dance party and open mic. Andrew gave a moving speech at our meeting that described how he saw his team develop and rediscover themselves during their time here at Hands On Gulf Coast. Later, at the open mic, the other team members expressed themselves with speeches and songs. Interspersed with the good byes and memories, Guillermo played songs from the mixes he made for each of the Red 1 team members. We danced to tunes and shed tears at the thought of seeing such awesome people move on.

We will miss the team members of Red 1 dearly. Best of luck to Andrew, Joe, Elly, Erica, Anne, Nora, Ali, Mike, and Coryn on your next project.!

Well, with the boss away, I wound up being the one who got to go to Home Depot to buy stuff for people. It's pretty interesting to see the diversity of stuff that you need to run a volunteer relief organization. There's stuff like 1000lbs of concrete for the park, or maybe it's 1600 rags for the mold crew to wipe down houses when they're done demolding, or maybe it's a bunch of replacement screw bits, or maybe it's 6mm, 100' long, 10' wide sheets of black plastic that we'll use to seal houses.

Anyway you look at it, I was really getting to know Home Depot on Cedar Lake Road. I almost felt like I knew employees in the departments, especially when I made two runs in the same day. I wanted to ask, "You remember me?"

The amusing part of one of my runs was when I was asking about bottles of Pine Sol cleaner. The guy in the paint department asked, "What are you cleaning?" "Oh, it's for a mold work shop." "Ha ha! I thought you were a college student with a nasty landlord making you do a lot of cleaning."

OK, well, maybe it's not so funny, but it made that trip to Home Depot amusing.

Hopefully, someone else will write something more interesting soon ...
Posted by Hands On Gulf Coast at 10:36 PM No comments:

This is the first post from the Hands On Gulf Coast crew. We have been slow to get back into cyber space for no good reason. That said, we haven't been doing nothing. We've continued to gut houses, demold houses, and clean up the mess that Hurricane Katrina left. More recently, (i.e., since 1 February 2006), we have hosted nurses sent down by Project Hope, we have built two playgrounds in partnership with KaBoom!, Nate and volunteers are making the Moss Point clinic a reality, we've begun a comprehensive mold remediation study in Hope 6, and oh yeah, the President came for a visit.

So, this space will become more active in the future and will be the voice of the volunteers who come help the Gulf Coasts residents rebuild their lives and communities.
Posted by Hands On Gulf Coast at 3:09 PM No comments: