Check out this article from the Mississippi Department of Archives & History. They did a story on some of the historical houses that have been completed here on the Gulf Coast and Hands On Gulf Coast has been highlighted. Check it out!

Posted using ShareThis
Posted by Kaje at 8:35 PM No comments:

Here's a video from WLOX about our service day at North Bay Elementary. Check it out.

September 11 Day of Service and Remembrance

On Friday, September 11, we will commemorate the 8th anniversary of the 9/11 attacks with a Day of Volunteer Service and Remembrance. This initiative, United We Serve, was started by President Barack Obama, who has designated September 11 as an official National Day of Service. 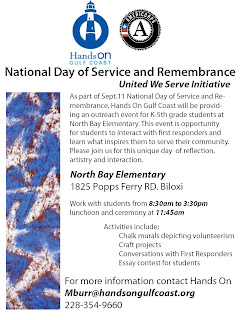 Hands On Gulf Coast will answer this call from the president by having a service project tomorrow at North Bay Elementary in Biloxi, MS from 9am till 3:30pm. Please come out and support Hands On Gulf Coast, North Bay Elementary, President Obama's United We Serve initiative, and the Gulf Coast as we honor those who passed during the 9/11 attacks and our firefighters, police officers, coast guard officers, military officers and countless others who put their lives on the line each and every day in order to insure that we keep our freedoms.