Just over a month ago, our Volunteer Coordinators were contacted by a staff member from CPCA (Center for Prevention of Child Abuse) requesting volunteers to help with their Family Funfair event at the 17th annual Cajun Crawfish Festival. After meeting with her and then advertising the volunteer opportunity in our weekly email, the responses came pouring in. We had a group of students who were interested in being the characters. We also had volunteers who were interested in just helping out in whatever area they could. We also....(last one) had an AmeriCorps NCCC from Perry Point, Maryland that wanted to help out. Needless to say, the Family Funfair event was definitely a success with the volunteers.

Soooo, on yesterday, one of our Volunteer Coordinators received a call from this same staff member again and she wanted to invite us to a Recognition Ceremony at the IP Casino in Biloxi. Two of our coordinators represented Hands On Gulf Coast at the ceremony and received an award for all the help that we was able to provide to the CPCA for their event. 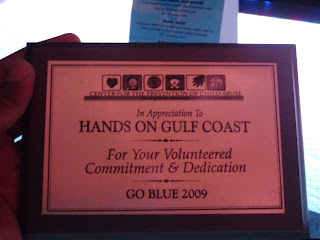 For those of you who don't know, April is the National Child Abuse Prevention Month. Check out http://www.mscpca.com/ for more information about Mississippi's Center for Prevention of Child Abuse and to possibly volunteer with them.
The picture to the left is the award that we received last night!

Tell Me A Short Story About Your Life.

Growing up in a small Connecticut town with liberal parents and a very New England education, I never imagined – in fact I never wanted – to find myself living and working in the heart of the South. For the past twenty years I stayed on track; I found the quintessential Ivy League experience and with the exception of a short term stay on the sunny west coast, I bled blue New England blood. Imagine my parents surprise then, when I presented them with an opportunity to volunteer full time on the Gulf Coast. My entire family was stunned that I would chose to spend my time-off in the South, and not in my hometown of Roxbury, Connecticut.

Somehow I managed to put my hesitations aside and in early January I found myself racing through John F. Kennedy International Airport; with just about ten minutes before the airline stopped boarding, and with just a change of clothes in my carry-on (I was too late to check baggage), I tearfully said my goodbyes to my mom and after she forced me through security, I was on my way. After a long layover in Atlanta and a time change later, somehow I made it safely to Gulfport, Mississippi where I was greeted by a kind cab driver who helped me with my nonexistent luggage. Jeff was a native of the area; like many of the locals I’d meet in the next few months, he’d been on the coast for over forty years and weathered many storms.

Without even asking, Jeff pulled out three books from underneath the passenger seat. He handed them to me and said, “this is my town, this is what we’ve been through, and this is where we’re going.” As Jeff drove me to Yankie Stadium, where I would live for the next few weeks, I looked through the photographic depiction of Hurricane Katrina. A few pictures, like the ones taken weeks after the storm at the Superdome in New Orleans, were familiar; others, like most of the South, looked completely foreign.

I tried to take in as much of the scenery, and as much of Jeff’s commentary, as I could, but it was difficult. I didn’t know what to expect of my experience and even though Interstate 10 looked relatively harmless, I still felt entirely overwhelmed and unsure of what the next two months would have in store. As we rounded the corner on Division Street and pulled into the Volunteer Village, I took one last deep breath and reaffirmed my purpose: “you’re here to do good,” I told myself, “you’re here and you can make a difference.”

I wish that my reflection on my experience in Mississippi could be cohesive, and eloquent and meaningful to anyone but me. But the truth is, the two months I spent on the Gulf Coast were probably the most exhilarating, confusing and fulfilling months I’ve ever had in my life. From the second I stepped foot on that Mississippi Mud, I was hypnotized by the people, the places, the beauty of the commitment locals had to rebuilding their home. Sometimes it was ugly, sometimes it was disorganized, sometimes inequality and evil were exposed; but mostly, what Mississippi was for me, was an infinite experience that allowed me to find myself in a very real and very genuine way. The truth is, I haven’t stopped “reflecting” on my internship since I left Biloxi in March; Hands On Gulf Coast and that experience is so much alive within me, that I just can’t find it in my heart to distance myself from it...


Which is why I'm officially coming back to the HOGC Team in June! I can't tell you how thrilled I am, and I will write more later when I don't have a midterm looming in the near future =)

One of the new partnerships that we've struck up since arriving in January is with Woolmarket Elementary in Biloxi, MS. During our initial meeting with one of the faculty members, Shirley Hartman, she told us that the school did not have an art program. I was immediately saddened by that because I think that all schools should have some type of arts program. All students should be exposed to the arts, whether that is drawing, music, painting, band, dance, or any other type of art. During that meeting, I decided (quietly to myself) that I would want to come up with some sort of art activity for the students to participate in. With a lot of Karin's help and some input from myself, we were able to start up these various art activities with the K-2nd grade students.

Our first Arts & Crafts Day was on April 7 with the Kindergartners. We had them color several Easter/spring related pictures. For the most part, they all had a great time. They were kinda all over the place but I think that they learned a few things from us and had a fun time talking to us as well. Some of them didn't want me to leave and they all wanted to know when we were coming back.

Our second Arts & Crafts Day was last Tuesday (April 21) and we worked with the 1st graders. It was the day before Earth Day so we brought bookmarks for them to color and then cut out. We also had some little Earth Day related pictures for them to cut out and then glue to a colored sheet of paper.

Today was our third Arts & Crafts Day at Woolmarket. This time, we were working with the 2nd graders. I handled one class alone until Kelsey arrived to help out. Today, we brought in some blank sheets of paper and had the students write their name in big letters. After doing so, they were instructed to draw things around their name that they liked. (e.g. - favorite color, sport, hobbies, etc). And they had to fill the whole page! Afterwards, I asked them to turn their page over and draw a self-portrait for everyone to see. Then, I hand-picked a few of them and asked them to stand up and show the rest of the class what they drew and why. A few were a little shy but others were more than willing to stand up. Overall, it was a great day working with them.

Next week, we will work with the kindergartners again. Fun fun fun!

PS - Thanks to Mrs. Brown @ http://www.mrsbrownart.com/ for the amazing art projects. That's how I found the idea for today's art activity. 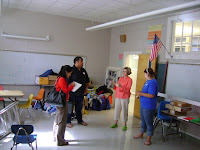 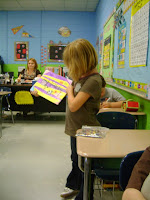 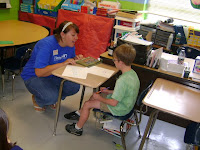 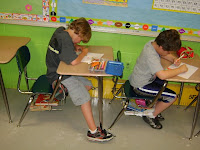 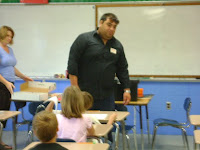 On Saturday, April 25, Hands On Gulf Coast held its 2nd service day project and collaborated on a park beautification project with the city of Bay St. Louis Parks Department, an AmeriCorps NCCC team from Perry Point, Maryland, and the Hancock County Boys and Girls Club. As part of Global Youth Service Day, the largest service event worldwide, the project promoted and celebrated service and leadership among youth ages 5-25. The event brought together both local community members and non-locals, including a group of junior high and high school youth that traveled from Ridgeland, MS to participate.

Over 70 youth and adults contributed to various projects at 7th Street Park, including creating a mural, adding a layer of mulch underneath the playground equipment, painting a basketball court, building/decorating birdhouses, and decorating tiles. As they reflected on the day, participants mentioned that they had fun and felt like they had made a difference in the park. One parent was pleased to see that her children were able to learn responsibility and could see the results of their efforts when they returned to the park to play.

The photos below are from GYSD 09. They're just a sneak peek of all the fun and excitement from that day. If you wanna see the rest of the photos, check out our Flickr page at http://www.flickr.com/photos/handsongulfcoast/ 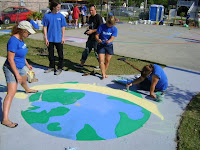 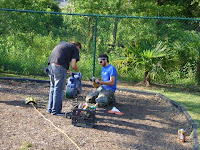 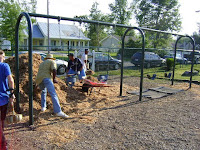 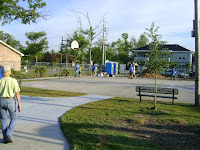 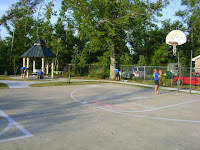