It is difficult for me to make this posting. I have decided to step down as Director and leave Hands On Gulf Coast, effective May 16, 2008.

I started with Hands On USA, arriving just days before they handed over the operation to Hands On Gulf Coast. I was there at the transition when Dave Campbell said, “Do you want a job? I just set you up for an interview in 20 minutes.” From day one with Hands On Gulf Coast, I have helped manage the organization, taking over as Director in January 2007.

Still, I came down like everyone else, a volunteer. Hurricane Katrina directly impacted my family – my grandmother and one of my uncles lost their homes in the New Orleans region. I knew I would be down. I thought it was just for three weeks.

Many of you have never met me because I prefer to work quietly behind the scenes. I enjoy the world of spreadsheets, budgets, computers, and yes, people. I worked with a great team of people to make your experience at Hands On Gulf Coast as rewarding as possible.

The opportunity that I was given to help manage, then lead Hands On has been one of the most rewarding experiences I’ve had.

I also have to announce that another pillar of Hands On Gulf Coast will leave on May 2. Sara Hamilton, now the Associate Director, came from Chicago Cares, the Hands On Network affiliate in, you guessed it, Chicago. She arrived in June 2006, after a week-long volunteer experience in April 2006.

She came back and immediately jumped in to manage our volunteer programs. After six months, the massive AmeriCorps program was handed to her with the simple directive “make it happen”. She developed, implemented, and managed one of the most effective AmeriCorps programs in Mississippi. Did I mention that she had no prior AmeriCorps experience and she had six weeks to recruit and enroll the first round of members?

Yes, Sara has been one of the other quiet presences at Hands On Gulf Coast that has kept the organization moving ahead despite transition and tumult.

Caitlin Brooking, currently the AmeriCorps Program Manager, will step into the role of Acting Director after I leave. She will hold that post until we hire an Interim Executive Director.

To ensure the delivery of quality volunteer service, we will be hiring an AmeriCorps Program Coordinator and additional administrative support, in addition to the Development Specialist who will focus on fund raising for us.

It is only appropriate that as Hands On Gulf Coast the organization transitions, so to does the leadership. It’s the next step in the evolution of what started as an idea in Thailand after the tsunami.

Thank you to each of you for your support of Hands On, the Gulf Coast, and this leadership team. The Gulf Coast and Hands On will continue to need your support in the months and years to come.

We've had some great news in the past couple weeks:

Sadly, two members of our construction crew left recently: JP and Fletcher. Both were great workers and contributors to the construction team. We, as well as East Biloxi, will miss their presences and their skills. Thank you for your commitment to the Gulf Coast. 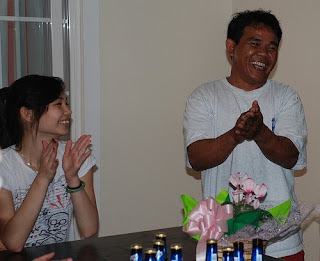 On Monday, April 21 2008, we had the house warming party for the Ngo family who lives at the Bowen Street house we've been working on. Though the house didn't have the final inspection complete at the time of the celebration, it didn't dampen our spirits.

The house looks great! The family is excited! Our AmeriCorps members who have dedicated their time and skills to getting the Ngo family back into their home are excited and happy. The dedication of this home makes this house the 12th house Hands On has completed.

We had help from other organizations. Craig Snow of Hopeforce sent a group of builders from West Virginia our way. They banged out quite a bit of the house and purchased quite a bit of material for the home. We thank them immensely for their efforts. The Amish also helped with the dry wall. I didn't see them hanging it, but by all reports it was quite the sight to see. There was also support from the East Biloxi Coordination Center in the form of site visits from Brandon and Richard, as well as contracting support. 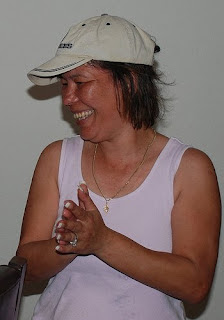 During the house warming party, Mrs. Ngo cooked up a mountain of food. Hand made egg rolls, shrimp fried rice, fried chicken, and grilled beef. She piled it high on Nic's plate. Everyone had a good time.

During a short speech expressing his gratitude, Mr. Ngo said that he was very happy and excited to be back in his home. This was now our home, too. He said we would always have a place with them.

As with each of the builds and rehabs we do, it's a group effort. We're happy the Ngo family is (almost) back in their home. 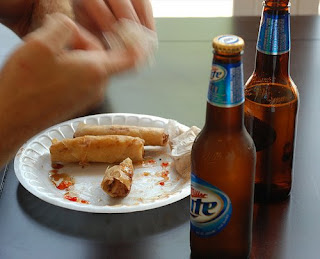 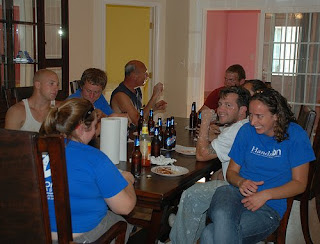 April has been a busy month for Hands On. Our Youth Development folks - Danae, Amanda, Jesse, and KC - have been working diligently to pull together volunteers and activities for the Child Abuse Prevention month. In partnership with the Center for the Prevention of Child Abuse, we have gone Blue.

Go Blue! is the campaign that the Center conducts throughout the month of April. Our good friend Demp Bell, the Wal-Mart Good Works Manager, introduced us to Michelle and Vicki. As part of this campaign, there were events each weekend at Wal-Marts around the Gulf. The events were designed to raise not only awareness of child abuse, but also to raise funds for the Center. We worked in partnership with the Mississippi Gulf Coast Community College to recruit volunteers and man booths and some of the Wal-Marts throughout the month.

The collaboration culminated with the participation in the Family Fair this past weekend. Sponge Bob Square Pants and Blues Clues were the draw for kids and families to the Coliseum. We had a booth manned by some of our AmeriCorps NCCC members and the Youth Development team. There was face painting and planting.

Planting? Yes, one of the options was for kids to fill a cup with top soil and plant the seeds of a plant. Lots of folks came by. I think we even convinced one of the Marines in the booth next to us to get his face painted.

We're happy we could support the Center for the Prevention of Child Abuse and raise awareness about such a critical issue.
Posted by :: Chris :: at 6:38 AM No comments:

The Road to Independence

Though it's been a long time in the works, the transition from program of our national offices in Atlanta and DC to a locally governed organization have truly begun. Though talks about Hands On Gulf Coast becoming and independent affiliate of the Hands On Network (now Points of Light & Hands On Network) have been around ever since I arrived in January 2006, we now have a mandate from the national board of directors to be independent by July 1.

What does independence mean? There are two parts to that answer. First and foremost, it means that Hands On Gulf Coast generates all the funds it needs to operate during the year, without the support of the national office. That means we need to be like every other nonprofit with annual appeals, sponsorships, grants, and fee-for-service options. Your support and continued commitment to the work in the Gulf will be a critical to Hands On Gulf Coast's success.
Second, independence means local governance. There are also two options being explored here. Because it's always a bad idea to start a nonprofit that duplicates the efforts of already established agencies, it's important to conduct an exhaustive survey of the nonprofit landscape, exploring all possibilities for partnership and collaboration before deciding that creating a new organization is best for the community.

We formed a Steering Committee who met for the first time of Tuesday, April 1, to discuss our options for local governance. The United Way of South Mississippi recently started a volunteer center - Volunteer Gulf Coast - with whom we've already worked. Remember Make A Difference Day (Oct 07)? It is logical to enter into a conversation with the United Way to determine whether there is a way to more tighly integrate our operations because of our closely aligned goals for community engagement.


With the United Way talk as context, the Steering Committee meeting was great. Our committee consists of nonprofit and business leaders. Some members we know quite well, others are just getting to know us. Resoundingly, they said there is a need for the services we provide - managed groups of volunteers and volunteer program development. Though we who work here and see the need for volunteer programs in all the nonprofits on the Gulf Coast, it was reassuring to hear our nonprofit partners and business leaders confirm our observations.


With that as our starting point, we asked our Steering Committee members to spread the word and suggest other people who might also be a good addition to the Steering Committee and could potentially turn into initial board members. We're always looking for new contacts and new opportunities to firmly root Hands On Gulf Coast on the Gulf Coast for years to come.


As the process unfolds and evolves, we will continue to keep you posted on developments.
Posted by :: Chris :: at 10:18 AM No comments: