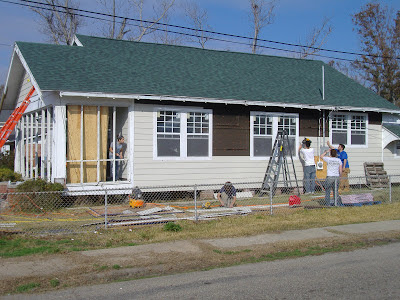 Hola todos!
This is to update y'all on the progress on Mr. George Strong's house on Lee St.

We are in full paint mode, putting 1st, 2nd, and 3rd coats on the walls and it is beautiful. There are 7 colors, craftfully chosen by Mr. George and Hands On's highly skilled interior decoration specialists. Thanks to the pro quality rock and mud job managed by our live-in genius Amanda, the paint is finishing clean and smooth.
Also, a committed crew busted it for 1 week plus to start and finish the siding. The house is all wrapped for Christmas and we're taking a break for break.
More updates, more consistantly. Promise. 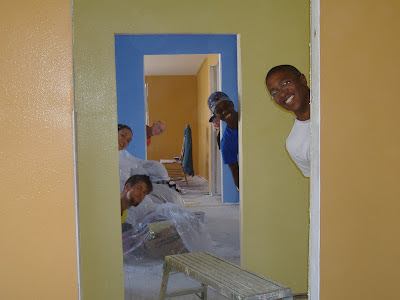 So..Marj and I snuck away for the month of December.. we are currently bumming around in Mercersburg, Pennsylvania.. which is where I grew up. There has been a lot of Christmas tree decorating and visiting with old friends... This has been helpful with passing the time while I patiently await the birth of my nephew (my best friends baby) which should be any day now. Marj and I love you guys!! For those who are not returning after Christmas my e-mail is KKernan09@hotmail.com so please keep in touch.

See you guys in January
I'll leave you with this to remember me: 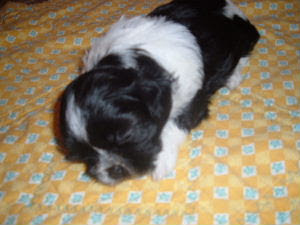 My puppy.. don't let his adorable face deceive you...
Kristen
Posted by Hands On Gulf Coast at 1:04 AM No comments:

A few hours in East Biloxi

I was finally able to tear myself away from the desk where I had sat for most of the week, sorting through electronic paperwork, formating files, preparing reports, and crunching numbers. I was exhausted, staying up until midnight most nights this week. You know, that's just the way it is.

I had promised the Falcon earlier in the week that I would come take photos of her cast. She's directing a children's theater production of A Christmas Carol. I had completely forgotten about this commitment, and was vexed on Saturday when she reminded me. Dang, that means I have to leave my number crunching ...

Actually, I was itching for a reason to get out of the building and a commitment to take photos was the best reason. Because the Biloxi Little Theater is right next to Mr. George's house on Lee St., I stopped in to see how the dry wall hanging was going. Luc was leading a crew of folks installing some dry wall on the ceiling, in the bathroom, and the utility room. Yeah, more drywall. It's great to see Mr. George's house moving along. He finally passed all his rough-in inspections ...

Moving from the serene symphony of measure, cut, sand down, try to place, bang on, remove, sand down, look discouraged, try to place again, and apply more banging until you have a good fit that is the process of hanging drywall, I went into the chaos of little children unleashed on Hands On volunteers. Saturday is apparently the day that the kids have found a boundless well of energy ...

I took my photos, most of which turned out poorly because of the light in the theater, my lack of experience working in bad light, and not having a good flash. Still, I think we got a couple keepers for the press release.

All I have to say .... Falcon, Ali (NCCC), and Ali (AmeriCorps), yall are saints for working with the kids. It's not that the kids are bad. It's just that the kids have so much energy, it's amazing that yall can keep up with them. I certainly could not do your job. Hats off! I'm excited to see the show.

I left to check out the Mr. George's again. The day was almost done. Luc and I were chatting and Luc saw it ... the little piggie. Yes, folks, on Lee St., across from Mr. George's house, there was a little black piggie oinking about. So cute. Naturally Luc tried to catch it. He ran after it, dropping his tool belt in the neighbor's yard.

I jogged after them trying to get a photo. The pig was smart and wouldn't let itself get cornered. Sorry, Luc, you had no chance against the wiley piglet. The funniest part of the chase was when Luc shouted at a group of kids playing near the Yankee Stadium, "Quick kids!!! Help me catch the pig!!!" One kid replied, "I ain't nevuh seen a pig."

Ahhhh ... an afternoon in East Biloxi. Dry wall, kids on stage, and pigs on the street. Does life get more diverse?

P.S. Luc, you made the blog, what do I get? :)
P.P.S. If you look hard at the photo, you might notice that it's been edited. That was to make it fit a little better on the screen. The pig really was there, just talk to Luc.
Posted by Hands On Gulf Coast at 4:59 PM 7 comments:

It's hard to even begin to comprehend my experience at the Boyz 2 Men concert last night. I was standing outside the Magnolia Ballroom at the Beau Rivage Casino and all the sudden from inside the other room I heard the lyrics to "Motownphilly." When I stepped into the concert hall my mind immediately flashed back to the days of braces, koolots, awkward growth spurts and middle school dances. After dancing all around and singing at the top of my lungs we finally made our way to our seats.

The show just kept getting better and better and was blowing my mind with every song that came on. Only a few songs into the show our (mostly my) enthusiasm eventually scared away the older couple who was sitting next to us. Highlights of the show included the classics On Bended Knee, Thank You, and Water Runs Dry. Far and away, the best songs were I'll Make Love To You and End of the Road; Elly and I were lucky enough to made our way to the front row just in time for these songs. Our bodies were pressed up against the stage and were two of the few "chosen" who received roses from the Boyz while belting out the lyrics at the top of our lungs. Our faces were glowing with sweat from singing so loudly off key and our hearts were racing from the thrill of seeing, and being so close, to the idols of my adolescent years.

Before I keep gushing about the Boyz I have to backtrack and mention the appearance of one of ours truly. Halfway through the concert we somehow persuaded Mr. Chris de Veer (probably because of our charming personalities and dashing good looks) to bring Hands On Hooded Sweatshirts to the show so we could give them to the performers. As the show was winding down Elly and I made our way back to the front of the room, sweatshirts in hand, to give out to the Boyz. Just as we got up there, End of the Road came on and the crowd went MAD. Every direction you looked in the audience there were screaming girls dressed to the nines hoping to be noticed by the three guys on stage. Everyone kept pushing their way to the front with the hope to touch the legs of a singer, give them a hug, or sing along in the microphone. Luckily we were right there in the thick of things and were able to give them our sweatshirts.

They ended the show with another rousing performance of Motownphily before bowing out. I was still in awe after the lights came back on and the auditorium cleared out; I stood there grinning from one ear to the other and not knowing what to do with myself. Standing there on stage, guarding the curtain from some crazed girl to make a run for the celebrities. Once I was a little more composed I approached the man, told him about Hands On and asked if there was a chance I could go backstage and get a picture of the Boyz with the sweatshirts. 5 minutes later he came back and before I knew it i was walking backstage to meet the guys.

My adrenaline was pumping, my palms were sweating and for the first minute I was in the room I was so overwhelmed I couldn't say anything. There they were, sitting on plush couches in the room just hanging out. They were very relaxed, asked who I was and what I did. They were very gracious and very thankful for all the work we do here at Hands On and were more than willing to hold up the sweatshirts and take a picture. I thanked them very much and was about to walk out the door and they asked if my friends and I were going to attend the "after party" at club Coast at the Beau. I walked out of there on could 9. I couldn't believe I had actually met them, let alone put my arms around them in a picture. 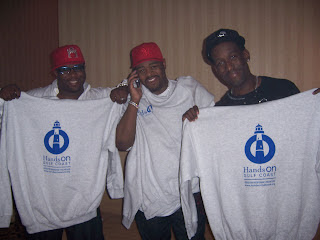 After telling my story in one long run on sentence to the rest of the group without taking a breathe the entire time, I stood there not quite sure what to do with myself. When discussing with the rest of the group whether or not we should attend the after party, of course, the crazed teenager inside of me wanted to go. We ended up going to the club for a bit. At this point I coming down off my high, was completely satisfied with my experience and ready to leave when all the sudden the three of them walked through the door of the club. Lo and behold, Shawn from the group walks through the door wearing his brand new Hands On sweatshirt. At that point I knew we had had enough; we had sufficiently left our mark and it was time for us to go. We had reached the end of the road.

Posted by Hands On Gulf Coast at 12:34 PM No comments:

I find myself with a little free time between installations of software at 3am and 8am. Why am I up at 3am? Maybe it was the mint green tea I had just before bed. The little bit of caffeine being just enough to wake me up in the wee hours of the morning and render me in capable of returning to the sacred slumber.

So ... I turn to completing tasks I wouldn't normally get done, which include installing software ... in between software installations, I have a little time to write about the random thought that entered my mind while reading one of the fun fact sheets conveniently posted in the bathrooms and other strategic places. There was a stastic about how much of various substances are contained in the average human body. Things like how much sulfur (enough to kill all the fleas on a dog), how much sodium, and how much water.

It was the water statistic that got me calculating. People who know me here know that it doesn't take much to get me calculating. So, it should come as no surprise I would wonder what sort of average person only has 70lbs of water in them. See, I thought that people were about 75% water by weight. That means the averge person the statistic is talking about is less than 100lbs.

It turns out that the average percent water weight in a person depends on age and body fat composition. The more fat, then less water. Hence the percentage can vary, but 65% seems to be the most agreed upon number. That means that you're looking at an average person sitting at about 108lbs. Doesn't sound too average to me ... so I looked up the average weight for adult men and women.

Makes you wonder about all the number you hear people throw around, doesn't it. They say 74.3% of the people make up statistics on the spot.

Don't you wish I never had free time again?

Posted by Hands On Gulf Coast at 7:59 AM No comments: