The fourth week of Spring Break has come and gone. As with each of the other weeks, it was a good week of service with diverse projects ranging from surveying East Biloxi to determine the needs of residents, to demolding, to working on some of the houses we're building, to participating in a community cleanup in Moss Point.

This week was a smaller week, with about 50 Spring Breakers from:
For those who opted into the Service Learning package, the panel discussion with members of the Steps Coalition was pretty lively. The panel had representatives from the Fair Housing Coalition, MIRA (Mississippi Immigrant Rights Alliance), LIFE (Living Independently For Everyone), and NAVASA (National Alliance of Vietnamese American Service Agencies). The focus of the discussion was grassroots community organizing in the wake of Katrina. Each of these organizations talked about the challenge of creating an equitable recovery for all.
We thank all the Spring Breakers who came down this year to Biloxi. We're still compiling the impact y'all had over the course of the month. We'll post that as soon as it's ready.
Posted by :: Chris :: at 2:27 PM No comments:

So, the third and biggest week of Spring Break came and went. We had over 160 Spring Breakers come during the week. They came from:
Wow! Talk about lines for food and the showers. Still, everyone manage to contribute to the rebuilding of the Gulf Coast during their time.

Many worked on education-focused projects, such as tutoring, helping with the Boys & Girls Club after school programs, working with Nichols Elementary's after-school program, making lunch for the teachers at the Center for New Opportunities and Pass Road Elementary, as well as the usual array of projects. 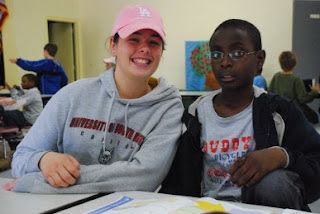 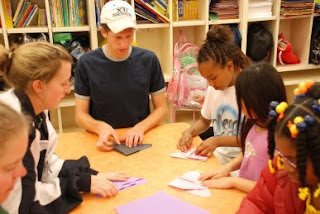 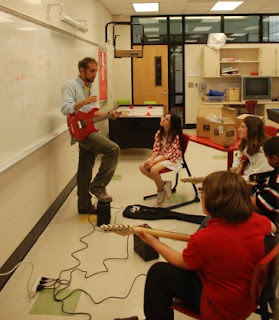 Spring Breakers began the second phase of construction on the Lameuse St house that was started in December 07. The house passed its framing inspection, which meant the insulation and dry wall was ready to roll. Fantastic!

Other projects were working out at Moss Point, helping to prepare the baseball diamonds for use, as well as the not-so-glamorous-but-very-important cleaning of drainage ditches to reduce the risk of flooding during heavy rains and the next hurricane to hit the area.

One of the other great projects that folks enjoyed was the making and distribution of easter baskets for the elderly. It's something that the residents love and gets our folks connected with the community they came to serve.

It's not all work, though. We had a crawfish boil and bonfire on the beach. We had about 100 people show up, learn to eat crawfish, marvel at the spiciness that a corn cob can absorb, and enjoy the warmth of a fire when the March winds blow.

For the service learning group, we held a panel discussion that focused on education issues. Teachers from Pass Road Elementary and the Center for New Opportunities came to talk to the schools who participated. One of the compelling personal reflections came from Ms. Drakeford, a kindergarten teacher at Pass Rd. Elementary. She said that her kids were 2 and 3 years old when Katrina hit. For the next year and a half to two years, there were no parks and no places for the kids to play. So the kids don't just play spontaneously. They sit around or play on the computer, but they don't run and skip like 5 year olds should.

That observation just brings home how critical each aspect of the work we do is. You can just work on a single aspect of the community's recovery to the neglect of the others. Community is not so much a place, but a state of mind, a concept, a feeling. You can't necessarily touch 'community', but you can see the effects of its presence. We help build those invisible linkages that become the basis for community.

Thank you to everyone who came down during your Spring Break to take part in not only rebuilding the Gulf Coast, but just as importantly building community. 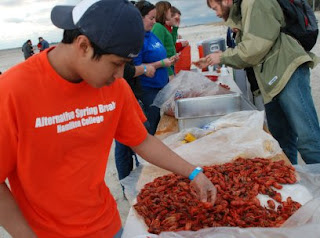 So, this week, we have fewer Spring Break volunteers. Rather than 160+, we have about 120 or so. A new AmeriCorps NCCC team (Eagle 4) arrived on Saturday, overlapping with Silver 3 who has been here for a couple weeks already.

This week we have:
We're focusing or service learning efforts on affordable housing this week. That means projects this week have more of a slant toward addressing the issues related to housing. Whether that means you're working in the Interfaith Disaster Task Force (IDTF) warehouse sorting furniture donations, to hanging insulation and drywall in a resident's home, to mucking out storm drains in Moss Point, each of these projects impacts people's ability to live in the area. Though often tedious, each project is important.

Rain continues to throw a monkey wrench in well-laid plans, but we adapt and over come.
Posted by :: Chris :: at 3:25 PM No comments:

Though the week started out with a bit of a drill - tornado threats, tents, and Alternative Spring Break (ASB) volunteers don't mix - and folks were tired, the week went well and we accomplished quite a bit. During the week, we focused on environmental projects. This included everything from removing garbage from Turkey Creek in Gulfport, to cleaning up baseball fields in Moss Point, to cleaning and clearing trails at the Harmony House in Gulfport.

With so many folks in the building, there were of course last minute challenges to over come. However, Delia, our Spring Break planner did a fabulous job preparing and anticipating most of the potential challenges. We at Hands On definitely appreciate that you all chose to put your volunteer efforts to work on the Gulf Coast. As you saw, we still need help down here.

Hopefully, you learned a little more about the South, the challenges the Gulf Coast faces in its recovery from the storm, and met some new, like-minded folks.